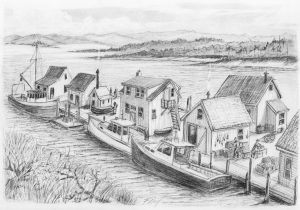 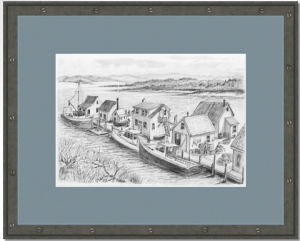 A proud Yankee Trans-Atlantic Packet Ship the “DREADNOUGHT”  was built in Newburyport Massachusetts, launched in 1853, recognizable by her red cross on the fore sail for the Red Cross Line and her Dragon figurehead.   Sailors nicknamed her “the Flying Dutchman” because of her amazing speed.  The most famous run was from NYC to Queenstown UK in 9 days 13 hrs, faster than a steamer. 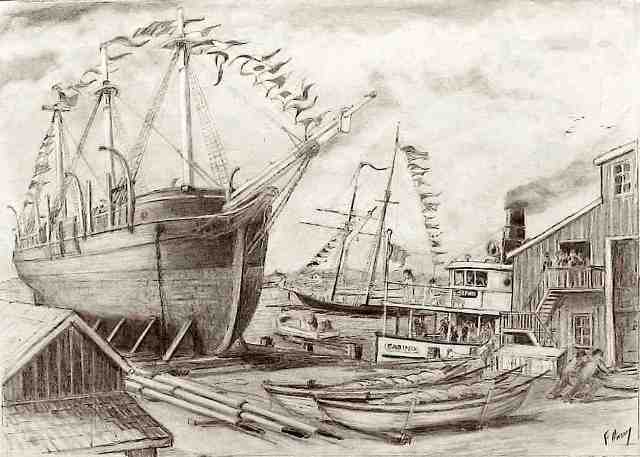 The whaling ship Charles W. Morgan arrived at Mystic Seaport in December 1941, narrowly avoiding destruction during World War II and was declared a National Historic Landmark in 1966.  In her 80 years of service, she made 37 voyages ranging in length from nine months to five years.  She sailed in the Indian and South Atlantic Oceans, surviving ice and snow storms with more than 1,000 whale men of all races and nationalities in her lifetime.  Charles W. Morgan was owned and managed by the J. & W. R. Wing Company of New Bedford.

Ranger – Flying Boats Reaching and Ahead at the Mark

Artist Fran Morey at work at Island Art Gallery
Throughout his professional career Fran’s drawing talents served him well and over twenty years ago, he was introduced to intaglio printing. It became a passion resulting in a series of prints depicting the golden age of classic yacht racing in the early 1900’s.

Kennedy Studios in Vineyard Haven is unique in its extensive collection of artwork, limited edition prints, giclees, original oils and watercolors. Custom design and framing available for your favorite art and photography,  as well as reproduction printing of antique family photos.